This page is made to be an archive of all games made by Neotron Games. We make these games for fun, and you are free to download them and spread them as much as you like. In most of the games the source-code is included, so you can learn from it, continue work on it or use parts of it in your own projects. All we ask is that you keep the archives downloaded from this page intact, toghether with their read-me's and everything else included. Games will be uploaded in the order they were made, so the further down the page, the older they get.

Have fun while playing our games!


Prometheon. At it's very first stage it is a crystalline construct, often found around the Aclocudios Pits. Bright yellow fumes and magenta beams of light emerge from its surface, slowly evaporating into thin air. When Aclopolarized it becomes liquid and in this process vast amounts of energy is released. It was the herald of the modern Age, the Age of Industrialization and Corporations.

But while it granted the Tribes the power of heavy machinarium, of world-devestating weaponry and of anti-gravitational flight it was nothing. Nothing compared to what was to come.

Gelatinum... The boundaries of reality were just about the be breached.


Prometheon is an action jump-and-run platformer with lots of shooting and light adventure elements. It has a big focus on variation as well as a slightly rpg-like story with multiple paths.

Our goal was to make a fast-paced game where the player can discover new things all the time; new environments, new enemies, new gameplay mechanics, new game modes, new insights in how the story fits together, etc. Simply, lots of surprises and variation combined with classic platform/shooting action. Besides the platforming the game also contains shoot-em-up sequences, various mini-games, "spirit" battles, etc.

This version is only the first part of the game, about 1/5th of the entire game, but it still contains loads of content and lots of gameplay. If you have played our previous title, Before We Were Dead, this game takes place in the same world although many thousands of years later. Still, there might be links between the two... 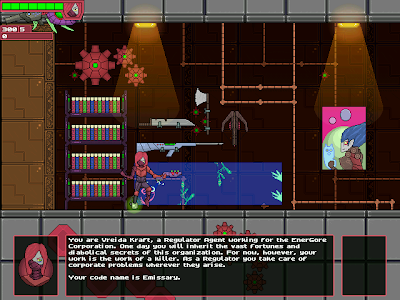 Hello, I'm a real human person and I'm interested it this! I definitely liked Before We Were Dead and I can't wait to see how does it relate to the totally different Prometheon (I haven't played it yet). I wish you good luck with further design!

Nice to see someone here who isn't a bot. :) Glad to hear you liked Before! We learned a lot by making that game, so Prometheon is a much fancier experience, while still focusing on telling the story of this universe of ours. I hope you like it!

Hello, I commented here before, I had some time to play Prometheon. The gameplay elements were pretty nice, along with interesting visuals and cool effects like these shadows on the walls. And of course, lots and lots of story, the game world looks incredibly big and detailed. Some gameplay elements were kind of unclear, though, as I had lots of weapons from the start (including three that look the same or one with three firing modes, I'm not sure) and didn't knew what are the differences between them, or how to recharge ammo and health. Unless I missed something.

I like it overall, how are you doing with the design so far? It's a shame you're not known more, I had a hard time finding your blog at first.

Hi! Nice to hear from you again, and it's really fun to hear you enjoyed the game. We really wanted to put emphasis on detail and story, so especially fun you liked that.

As for the weapons, they were supposed to be given one at a time as the story went on, but in this demo episode we decided to include them all. Especially the Sword is far too overpowered for this early in the game. Also, ammo and health can be found in small pink packs around the levels. They might be a bit hard to spot. :)

Would indeed be fun to get some more response about the game. Some have turned up on other pages though. All our games are available on GameJolt for example : http://gamejolt.com/profile/imerion/5288/

A registration Bonus of Mega888 Apk will be awarded to all new gambler, with no deposit wanted. All company can also release up to sgd50 on live games. Mega888 Original Download App for free and take a near seat at one of our live Mega888 casino tables or recognized blackjack tables. There are plenty of ground-breaking variation of classic like blackjack and roulette.
Either enter one of the impressive roulette rooms or play on of our Mega888 Test ID 2021 Jackpot slots.
We bring the action from the online casino floor straight to your mobile or tablet, so you can play the Best Game Mega888 and bet on the top sports proceedings with the handle of a button.
Actual Money Online Casino Games.

Imerion
This is the Neotron Games game archive. We make games for fun, and you are free to download them and spread them as much as you like.